THE BEST OF THE WONDERFUL BELGIAN BAND ORGAN 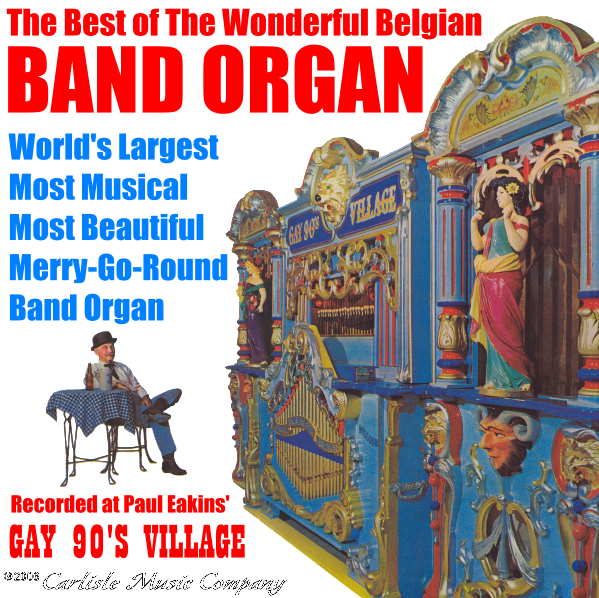 The stately  organ, aka The  Emperor,  was made in Belgium by Mortier before the turn of the century. This organ at that time it played from a pinned cylinder called a "cob." The cardboard books of music it now plays from are made of a special material from Sweden with flax in it to keep the perforations sharp and clear. Instruments played by this machine include 418 pipes, bass drum, cymbal, snare drum, double castanets and 22 xylophone bars. Its effect is similar to that of a 60 piece orchestra.

The following is a list of instruments as they are controlled by the "brain" or keyframe as shown on the original gamut book; madolinne, piston, xiliphon, trommel snare and cast, tremelo, gross caisse, klein fluit, groote fluit, harmonium, violincelle, saxifoon, trombon, voisc humaine fixe, voisc celeste, violon. Every piece of this organ was hand made-even the brass vox humnan pipes were swedged and flared by hand.

The ingenious tremelos will produce, with the vox humana, violin, diapason, and melphone, a marvelous sound not unlike the human singing voice.  This new Compact Disc collects the best songs and brings them to you remasted from the original master tapes. You won't believe how good these songs sound. You have never heard them like this before. They sound as if your standing right in front of the The Emperor himself.

Let Me Call You Sweet Heart

Oh,  How I hate to Get Up in the Morning

Trail of the Lonesome Pine

How Ya  Gonna Keep 'em Down on the Farm?

Entry of the Gladiators

Yes,  We Have No Bananas

I'm looking Over a 4 Leaf Clover

Back to Compact Discs page